Make a fist. Press your thumb inside. This little trick has saved me, a person with all her wisdom teeth, many times at the dentist’s office. But why?

And while it’s enjoyable to see all the ideas that have popped up on Reddit, there’s also a slightly more scientific reason.

A study in 2008 found that by pressing a point on their palm, the subjects who had a particularly sensitive trigger point for the gag reflex, could actually move back their trigger point further in the throat. A dentist’s dream – less gagging by patients. 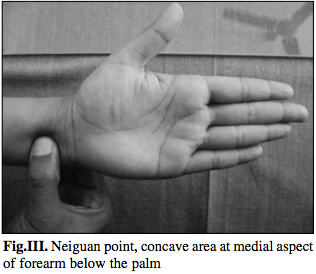 But the palm isn’t the only place. Studies have also cited the Neiguan point – a place on the forearm just below the palm, as well as the Hegupoint – the concave place between your thumb and pointer finger. Applying pressure that gradually increased on each of these areas was also found to help patients who couldn’t quite fight the reflex during dental impressions.

If the arms weren’t working, there’s also the Chengjiang, a slight groove found halfway between your chin and lower lip.

Or, if you’re just lucky, you could be the one in three who doesn’t even have a reflex.

2 Responses to “Why Does Making A Fist Stop The Gag Reflex?”